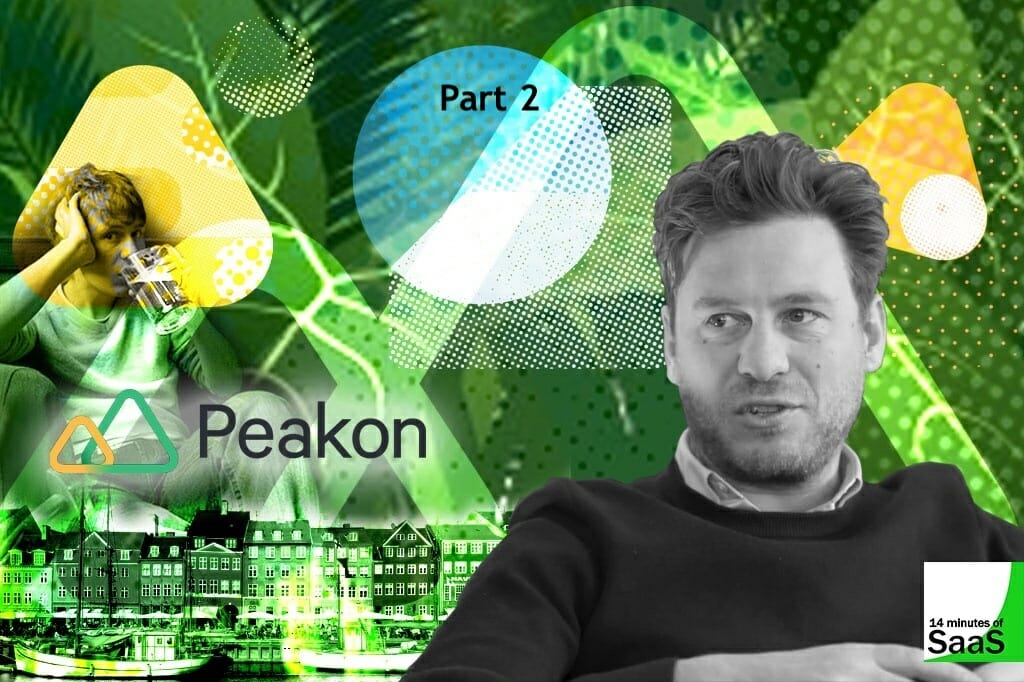 In the 2nd and concluding episode we go much deeper into the value that Peakon actually introduces into the world – and how things like contextual learning targets can improve management teams more effectively and how comparatively high Peakon numbers can be used to attract employees to your company. He reflects on their attitude to remote v co-located, discusses some interesting angel investments, why not getting disheartened easily is crucial to success in the startup world and how Peakon becoming a delivery hero for Niklas Östberg was a crucial milestone for the company.
Listen to 14 Minutes of SaaS on Spotify / Apple podcasts / Google podcasts / TuneIn / Stitcher
——–

Benefits of Peakon: Attraction, retention, work effectiveness, employee sense of achievement and agency … which are more important … Is there a stack rank?

It depends on the stage the company is at and the type of industry and what one is trying to achieve. For examples retail and hotels have naturally higher attrition – trying to reduce that is crucial – in big retailers and hotel chains, reducing attrition by 1 or 2% is 10s of millions. Also the link between the disengagement and associated attrition is huge … e.g. if you have unhappy employees you’ll see that immediately on the front desk of a luxury hotel (for example). You’ll see that immediately in the customer NPSs (Net Promoter Scores).

One that hasn’t been mentioned so far is trying to improve management. For example training should be management employee sensitive and context sensitive in the context of the team they are in.      Not only can they tailor the training to the individual contextually e.g. here are 3 impact areas that will make the biggest difference to your team – and areas in which you’re not doing so well – and here’s things we know have worked before from our vast data etc.

This area can be huge.

It takes out the whole perception issue in annual reviews … it’s much easier to work with people in context and continuously and backed by data – so its more likely to be accurate and with better recommendations made off that. Also if the process is done continuously, you can see the trends rather than the absolute numbers – and one will not be held hostage to someone having a bad day on the annual review.

Lately more companies are using Peakon numbers as a factor in reviews when looking at pay grades/promotions etc.

Job Today looking at the jobs locally in high turnover in for example retail industries and hotels etc. Could they partner with Peakon? They’ve toyed with it and Phil Chambers has chatted with Polina Montano. Very interesting for an applicant to know what’s really happening in a company. The Peakon number is an actual indicator of how employees feel – and it’s used for bonuses especially execs. Glassdoor reviews are not verified and there’s an awful lot of people with axes to grind and competitors putting in fake reviews etc. One company recently published their own data publicly and said ‘hey our Peakon numbers shows we are in the top 5% of companies to work for in industry X, you should come and work here’. Peakon are not in a position to publish those publically – unlike Glassdoor – but it was the CEOs prerogative to do that and, of course, Peakon loved it and shared it everywhere.
Internally they provide shareable dashboards because they encourage transparency – so any manager can share a dashboard to the rest of the company – so people can see the progress. They can share the actions they’ve taken with individuals etc.

Remote employees …. They are mostly collocated in several cities … as mentioned before … they are looking at remote workers even though that’s not a part of their culture yet – they have a few remote employees especially in engineering e.g. Albert working out of Barcelona (with once a month visit to Copenhagen). Mostly engineering, but looking at sales. Matt Orozco works remotely in Long Beach, California – near LA. He’s in sales and he’ll be part of an office if they build one there. They’re looking at distributed, but its definitely not a big part of their culture. Also they do twice a year whole company summits. He talks about one in Bologna. It’s been traditionally a left wing city – La Citta Rossa (the red city) is famous for communism, but actually it’s very rich and is certainly not as left wing as in the past.

Phil mentions the Director of Employee Experience, Michael Dean who is a …
: )

… strident Marxist, loves Formula 1 and loves pasta … the confluence of these 3 forces have brought Peakon to Bologna. Nothing to do with Peakon itself of course!
: )

What’s the daily routine like?
Tries to spend a week or 2 a month at home in London – but travelling is key. Has to do some travelling in Australia and NZ to support the Auckland office and their customers and prospects.

He’s also going to head off to do some voluntary work with his girlfriend and filming just outside Rio in a rainforest – where he’s helping her film a wildlife program on reforestation in the Mata Atlântica in Brazil. He’s working with Ecosia too which is a search engine that will plant a tree for every X number of searches.

What drives Phil personally? Loves building companies – can meet people that are very interesting that one couldn’t meet usually in other works of life – feels his job is hard but a lot of fun – and feels this tells him he’s doing something right.

Angel investment. He invests quite a bit but doesn’t spend a huge amount of time on it. Tries to support companies in the local area. In Copenhagen he invested in a company called Planday – workforce scheduling – one stop shop for when one should be in work and how much is one getting paid – again in the retail and services area.
He invested very early in a company called Tonsa – attempting to build the world’s largest platform for scouting … get the kids to put in the data and the big clubs get access to it to scout. Doing incredibly well – penetration in the countries they are working in (European countries e.g. Denmark, France, Italy, UK, Norway, Germany etc) …. Is north of 78 to 80%. Huge adoption is the youth leagues they’ve gone into. This is really valuable for Europe because in the US they are stats obsessed. And in Europe we don’t have enough data in sports. We agree the US is obsessed with stats and hil just wishes they’d talk about Liverpool football club instead : )

Amassing unique data sets like these is a very powerful strategy and can be the basis of a very large business.
Tips for success.
* Just do it!
* Set clear goals early
* Remember not to get disheartened too easily. That first break can take a long time to come along.
You can get no response for ages and then suddenly one customer can change everything for you. Delivery Hero completely changed the game for Peakon. Emmanuel Thomassin  , , Chief Financial Office, was the 1st one to reply and took a look at Peakon and loved it when it wasn’t all that good yet. Niklas Östberg, CEO and Co-founder, loved it too.

Once you get those customers work incredibly closely with the. They’ve watched Delivery Hero grow from 300 employees when they started with them to nearly 7K employees and have acquired over 30 companies along the way, they’ve IPO’d. They helped Peakon make their product better and provided an ever expanding source of cash.

* Once you get those early key customers (like Delivery Hero for Peakon), double down and focus on them to help make them successful and your product continuously better

At the end of the interview Phil (literally) runs off to the airport. I think he slowed down around the corner and was just trying to escape me : )

One of Peakon;’s marquee customers is Trustpilot, whose CEO & founder Peter Mühlmann – who I’ve just met and interviewed – he will appear in a later episode of 14 Minutes of SaaS. But in the next episode we have Jonathan Anguelov, co-founder and COO of a rocket ship called Aircall, the only cloud phone system that has built over 100 different integrations into SaaS applications in 2019. It’s mission is to unlock the power of voice, specifically the power of telephone calls