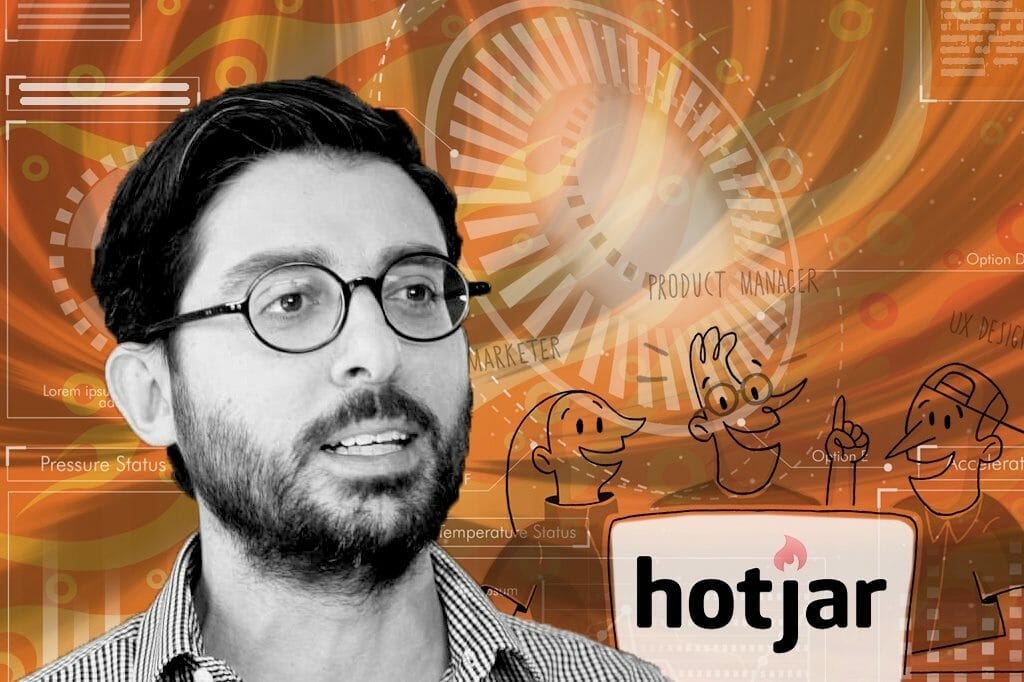 The remarkable story of Dr. David Darmanin’s startup awakening at 4 o clock in the morning in Malta that led to the founding of Hotjar – software used by marketers, product managers and UX designers that helps you rapidly understand your customers with website session replay, heatmaps, analytics, surveys, and in session questioning. David talks about his business to Stephen Cummins in SaaStock. It had 60K sign-ups in the 1st 6 months and is now used by over 350K companies  in 184 countries. It’s a 100% distributed (in other words fully remote working) company with 90 employees spread across 20 countries and its current revenue run rate is north of 22M USD per annum. David found a market need very quickly.

Probably the most special moment, 2 or 3 of these startups in ….  I was reading a book in bed and it was 4 o clock in the morning (or 5 o clock in the morning). I had woken up early. And I was reading, I know it sounds like a horrible name for a book, but it’s called the Fast Lane Millionaire. It’s a really good book actually … because it goes beyond just making money … it talks what are the key human elements you need in order to succeed beyond just money. It’s a catchy name. It’s not that type book. And I remember I woke up my wife and I said “Listen, I’m gonna quit consulting. I’m going to speak to 2 of my co-founders in a separate business and we’re gonna merge … and we’re gonna put personal money into this. And I’m gonna think much bigger. And she was like …  just do whatever you want, but just go back to sleep!” I Have the best wife in the world. She supported me through everything so…

Welcome to 14 minutes of SaaS. The show where you can listen to the stories and opinions of founders of the world’s most remarkable SaaS ScaleUps.

Episode one of two with David Sarmanin, founder and CEO of Hotjar, recorded in SaaStock in Dublin. Hotjar is software that helps you rapidly understand your customers with website session replay, heatmaps, analytics, surveys, and in session questioning. It’s a 100% distributed (in other words fully remote working) company with 90 employees spread across 20 countries and its current revenue run rate is north of 22M USD per annum. David found a market need very quickly. It had 60K sign-ups in the 1st 6 months.  It is now is used by over 350K companies  in 184 countries. 96% of employees on glassdoor would recommend it to a friend and David has a strong 95% approval rating as CEO.

…. David, it’s great to see you here in Saastock!

Great to be meeting you here!

Thank you. Can you tell me your life in 90 seconds or so …. right up to the point where you founded Hotjar.

90 seconds. Okay. Born Australia. Move to Malta. Feel like citizen of the world because I’ve travelled around. Studied law. That was kind of a waste of time I thought. I then saw a software company – Swedish – looking for someone to optimize millions of pages. I was like ‘Cool .. this sounds interesting!’. I left the startup I was working on to work with them. And yeah, I learned so much there. Met my co-founders. We grew the business a lot. B2C software. Did six years of that. Learned a ton. Attended every event I could. Used every software in the industry. And, then I landed a gig with conversion rates experts in the UK. And there I was working with some of the biggest brands in the world. And it was scary and awesome at the same time. Learned a lot from that. And realised that the software I was using – I was not the only one that wasn’t particularly happy with. It was very enterprising, very sales focused. So I thought ‘hey, I’m working on these side projects – like startups which are not taking off.’ What if instead we disrupted this market – went to my present cofounders who I’d worked with in that Swedish company. Three Maltese and two Swedes. And that’s the 5 of us. And we said ‘Let’s disrupt it together!’ Launched the beta and that was it.