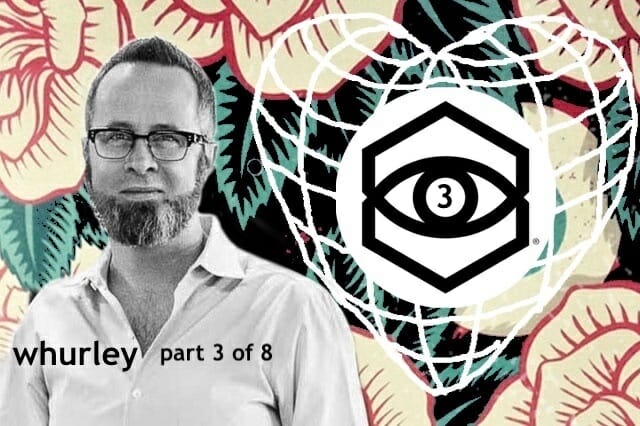 Part 3 of an 8 episode 14 Minutes of SaaS series with whurley, CEO & Founder of Strangeworks. Our protagonist acquires wisdom & sheds his super-hero costume – he’ll create an interface between a swelling crowd of dev talent and tech that’ll utterly transform our future – in incomprehensible ways. Quantum Computing. The project is revealed. Baby steps into a quantum leap and a vision of an AWS for Quantum. “But that’s kind of been the narrative arc of my career … First stage of the career was all about the tech. Second stage was all about the financial success and a sort of the notoriety. Third stage it’s about how I’m gonna help other people, I’m gonna be this hero. 4th stage,, with Strangeworks, is realising I’m never gonna be the hero. I’m a catalyst for creators, and for innovators.”
——-
Summary:

That’s been the narrative of his career. Phase 1 was doing it for the technology and the fun and experimenting and being a geek and working with some tremendously talented people. Phase 2 was creating this heavily profitable company and being the guys that everyone wants to work with and emulate. And now phase 3 realising that in phase 2 there’s a myth that being profitable makes you happy, but realising that what really made him happy was helping people. So when he sold Honest Dollar to Goldman Sacchs he was very comfortable doing so because they have a much larger platform – they are the IBM Blue Channel of the financial world. For example before he left they were able to confirm that 10s of millions of people would have to option to benefit from this innovation. That is something a startup could never bring to light – but being a cool entity inside of a massive financial firm with the credibility of almost 150 years as a world class player was a completely different story. This was the right exit for whurley on a number of levels.
He’s a bit critical of Accenture’s acquisition of Chaotic Moon, because they “crushed the life out of it and it basically doesn’t exist anymore.” However GS, where everyone had told him they would cruch the company, they were happy to let Honest Dollar retain its name and keep its branding and it’s growing and they’re doing much bigger deals and hiring a lot of people. And they actually lowered the entry price from the original $5 to $1 a month! They made the product even easier for the little guy to get into.

Surprisingly whurley professes that being head of Honest Dollar post acquisition was not at all boring. Boredom comes easy for whurley, but he was given a very high level position with lots of freedom to learn a lot about finance. He loves getting that in-depth knowledge of domains and working there was like “drinking out of a firehose” in terms of learning more about the industry. However it was more restrictive than other things. He missed his god-like control of the startup, having given up so much freedom. He says GS is the best exit he has done and he’s still collaborating with them. He’s not a guy on a board or a CEO on a publically traded company. He’s an entrepreneur. He needed to move on.

Doing it for the love of tech and to make lots of money. Doing it to help people to be the hero (which he professes he is not) has eventually led to a 4th phase of his career as founder of Strangeworks. He’s never going to be the here, whurley sees himself as the catalyst for helping great people be heroic.

So What is Quantum Computing? And why this move?
This is whurley’s attempt to really move the planet. His ultimate catalyst move. He’s building a platform for great developers to access quantum computers and build great solutions in a variety of domains.
He doesn’t want to design a new type of quantum computer or win the Nobel prize for quantum mechanics. He wants Strangeworks to enable companies led by creators and innovators – allowing great developers around the world to access quantum computers, but use their classical computers to build great solutions that then access the power of quantum. Strangeworks want to provide an intermediate layer, a stable state for companies to access quantum. He wants to enable the real heroes in this world to do drug discovery or solve problems in astronomy or optimise for any complex decision making process or use case.

Historically you had to be an electrical engineer to program – you had to understand the voltages between the gates. These days most developers probably don’t even know there’s gates. At the moment you have to be a quantum physicist to program a computer. It’s only a matter of time before developers will be able to program them without knowing the deep physics behind what is happening. Strangeworks wants to greatly accelerate that inevitability. The number 1 problem in quantum computing is the lack of apps. Right now a huge problem in quantum computing is “What can you do with it?”. And one of the reasons this is not known is that too few people work with it and almost none of them are involved in businesses that create apps. He wants to open it up to the devs and hackers and entrepreneurs out there. He’s talking about the democratisation of quantum computing … access to large numbers of users used to imagining, designing and building solutions is the only way to accelerate it’s development. And yes there are people in IBM, Microsoft and Amazon other big companies doing interesting stuff with quantum, but it’s the devs and entrepreneurs around the world that will really push it forward fast.

Quicker time to value and deploying to multiple platforms to see which one works best – great for the enterprise – can run on a D-Wave and a Rigetti and an IBM quantum computer.

Strangeworks wants to be the AWS for quantum computing. Even if they can’t afford the consumption costs – they have simulators and emulators, they can experiment.

This tech is becoming much more relevant, much faster than most people expect. Recent history in particular is evidence …

However massive leaps in this are coming in the next 8 to 10 years, but the initial significant impact comes in 2 to 3 years in whurley’s opinion. He wants as an entrepreneur to build a successful platform, but the social aspect of this is key as well. Strangeworks has even published a manifesto with axioms to support this. In Axiom 6 whurley declares a desire to make the world a better place 1 Qubit at a time. In his 7th axiom he states that he wants Quantum for good, not evil. So will this be a carefully curated set of people that have access to it, despite the goal to democratise and widen access to people who have been working before and doing good stuff?
It’ll be a mixed approach on a case by case basis. They’ve moved extremely fast – in July they’ll have their 1st paying customers using the platform. And they have that now. They are already becoming the dominant player in software in quantum because most other companies are focused on hardware and consulting – some have software. But he wants to see all of them be successful.

They are communicating with 1Qubit and other companies in the space. Employees of 1Qubit attended whurley’s SXSW keynote and their CEO and Co-Founder, Andrew Fursman, attended Strangeworks’ launch party. They openly talked about whether or not they’d be competition – there’s a huge pie and plenty for everyone. Strangeworks wants to be a great resource for all these companies.

37.30 And so one of the things I wanna do is build a platform that integrate everyone’s software and hardware. Now Strangeworks’ becomes a gatekeeper but all of this stuff. Now Strangeworks becomes an entity that can send customers to IBM or D-Wave or 1Qubit or Zapata or Rigetti. But there’s no evil plot whurley says. They just want “to create some kick-ass tools” that allows everyone to access quantum computers in an easier, more efficient way.

And every country should be looking to be ready for this.