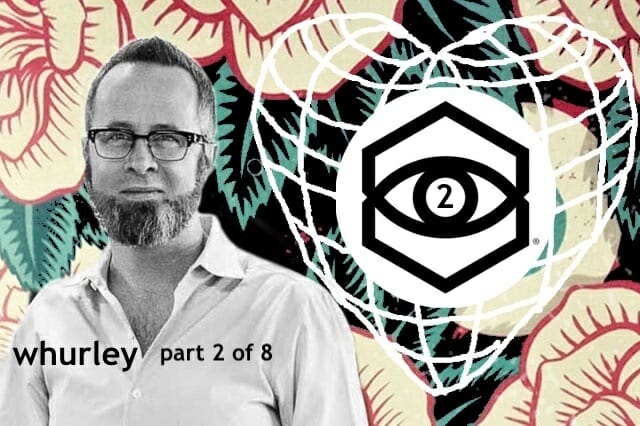 E32: Whurley – Founder & CEO of Strangeworks – 2 of 8 – darkness before enlightenment

A rapid ascent, an emotional fall, and onward to a higher purpose.
A whirlwind career as a serial-entrepreneur takes off as whurley loses the fear, gains financial independence, goes through a psychological slump, and then emerges to invent retirement as a service. “I had all this money. I could go get a job anywhere … I had kind of plateau’d and it’s worthless, it’s totally useless. Here was this idea and I thought that ‘oh when I make it and I’m succesful’ and I have monetary success, then all of these things will fall into place and there won’t be problems … I was very depressed in the latter part of the company I had this idea that.”
—–
Summary:

He left BMC in 2009 in November and in 2010 he had launched his 1st start-up called Chaotic Moon at SXSW – it did phenomenally well – they developed Steve Jobs and Rupert Murdoch as clients … and they built tons of mobile apps for amazing clients like Starbucks. This was the role that changed his life. It wasn’t just the overwhelming financial success of this, but rather this was where he developed the developed the true muscle memory of building and rapidly scaling successful tech companies. It made him more money in distributions than it did in selling to Accenture. The financial success gave him the freedom to develop cool stuff like the mind controlled skateboard (the ‘Board of Awesomeness’ for Microsoft Kinect) and tazer drones and the ‘Smarter Cart’, a shopping cart that followers the shopper around the store and the ‘Helmet of Justice’ for cyclists which had 7 cameras set to start recording on impact in a crash – behaving like a black box for an airplane. He was also working as the division head and the face of the company and helping work out how to sell and figuring out some of the marketing while speaking and writing. He was everywhere in the company and it was the making of him – he ended up doing innovation having already being the initial CTO and being the face of the company was an incredible experience. In 2011 he created a division with Phil Wheat called Chaotic Moon Labs. Cofounder Mike Erwin and he are still partners and he still talks with Ben Lam – even though it was widely publicised they fell out in the end. In fact they had an amazing time building and marketing incredible stuff together for companies like Microsoft, CBS sports, Pizza Hut and News Corp – who they built the first iPad only digital newspaper for. In 2012 Chaotic Moon purchased whurley’s earlier startup Symbiot. Chaotic Moon was acquired in 2015 … not that long ago and this indicates how much whurley’s already remarkable life has accelerated again since then.
He lost the fear during the Chaotic Moon experience. It was unbridled and it went too far. They drank a little too much of the kool-ade, but having this uninhibited wildness and freedom to do whatever they liked. Stealing a Wholefoods shopping cart in the afternoon and then hacking the hardware and software together to make it smarter on the weekend. Ben McCraw and the rest of the creative guys may have been the greatest group any of that team had worked with at that point in time. It felt liberating and they built a great sales team. They eventually made Ben Lam the CEO because he was phenomenal sales guy. John Freemont was very influential sales guy and he deconstructed the process to make it better and more structured to bring the revenues up to another level. They had a mass of talent – and that led to everyone wanting to work with these guys. It was a great experience overall.

He then touches on 2 big mistakes he made:

Before Chaotic Moon he had not really been capitalistic. Up til then he was more focused on ideas and creativity and invention and cutting his teeth leading technical teams, but suddenly now he had this incredibly raw capitalistic experience with his first co-founded startup. This led to lots of money and fun doing multi-million dollar deals, he had money to invest in other stuff – but the latter period of the existence of this company as an independent entity was traumatic – he hit an emotional wall and he felt depressed. He had all this money and he had plateau’d. He realised the money and success on its own was worthless, totally useless. He could go off and travel and do whatever he wanted, mentally he felt caged and emotionally he felt so disappointed. This was similar to a subject Ysiad Ferreiras had spoken about in TOA that week – he talked all about Maslow’s Hierarchy and how many entrepreneurs when they make it crash and burn, because they haven’t found a higher purpose. Again whurley reiterated that the money was “nothing”.

His first startup was for fun and profit. He wanted his second startup to be social impact. He had funded some social impact projects, but he wanted to found something game changing in that domain.

That sense of freedom and then the emotional ‘fall’ he experienced led to the next idea ‘Honest Dollar’ – he co-created the ‘Retirement as a Service’ paradigm.

His second mistake was the ‘I will be the hero figure’ complex. He found a savings crisis problem in the US and teamed up with Henry Yoshida to solve this. If the average person in the US has an expense of $400, s/he is basically insolvent. This is why you have all these legal loan shark places that take advantage. He wanted to bring some equality to that situation. So they came up with a creative solution whereby if you wanted to be in a vanguard fund ($25K), they could put a low earning worker in there for a dollar. They were essentially employee retirement accounts for small business. It was a very innovative solution in the retirement space. He researched it for months before accepting Goldman Sachs approach to buy the company. He was impressed with the buyer – they have a bad image because they have some people who were involved in some bad stuff, but most of them are good professionals.
Selling on the 1st anniversary of the launch of the product was an amazing achievement.
Selling to Goldman Sachs was also huge after being laughed out of many offices by people who said they’d never make it. There was massive poetic justice in going onto CNBC the day they sold and talking about it.
—-
Transcript: