Throwing Rocks at the Cloud

Hyper-Growth SaaS companies are not in crisis. Reflections on recent losses by SaaS Leaders, an Emotional Marketplace and Irrational Stone Throwers

The latest article by Tomasz Tunguz uses data very effectively to show us that the current market turmoil has more to do with ‘voting’ than ‘measuring’ i.e. the patterns indicate a much higher degree of irrationality than usual. He focuses on SaaS companies and clearly demonstrates that there is no significant relationship between profit levels and the level of price drop. It shows the same disconnect with cashflow. In fact those with the highest revenue growth rates suffered the largest price drops — these include New Relic, Zendesk, Hubspot, Marketo, Demandware and Tableau. This indicates a current market going through a phase where emotion trumps reason. Tunguz credits Benjamin Graham in ‘The Intelligent Investor’ for having pointed this out decades ago. The difference today is that we have data to prove Graham’s point.

For some reason certain words seem to carry an air of rationality with them. A word like ‘correction’ is a word. Nothing else. Market falls become memes in a billion bottles. We read all sorts of things into them while ignoring the sea of data all around us. You’ll notice that Tableau (DATA) suffered the greatest initial collapse. In recent days I have seen a couple of incredibly unsophisticated ‘competitive’ attempts to discredit companies that have suffered huge losses.

In one particularly reprehensible example, I saw a senior legacy software giant employee (who I won’t name) post an image of Tableau’s spectacular losses. Let me point out that I have no relationship with Tableau. He accompanied the image with a statement implying that this software was “pretty” but too complex for the “simple” solutions required. A ridiculous stone cast from within a glass mansion. Here’s the image posted. 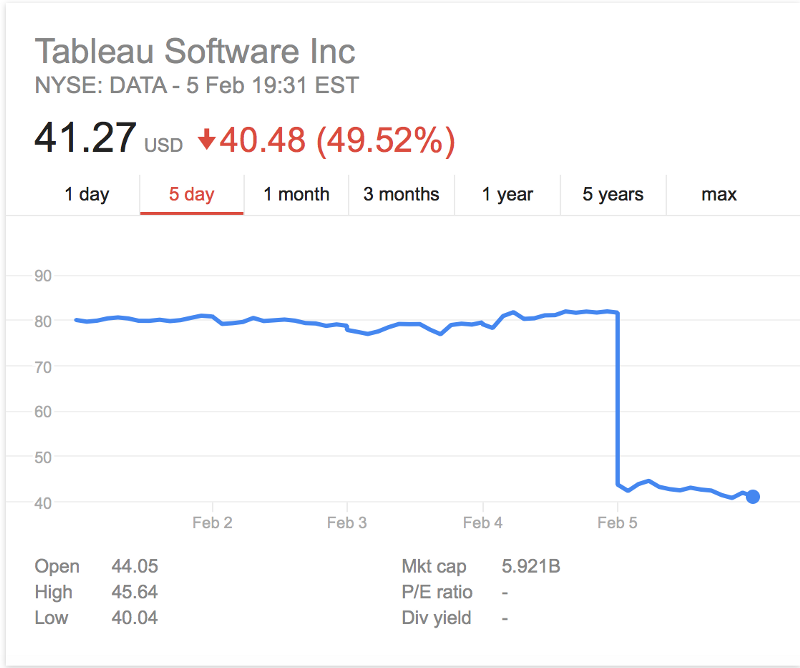 This behaviour is not only reprehensible, it is devoid of intellect. When you see employees from companies gleefully post updates on the misfortune of another company, it is almost invariably a sign that they are bad-mouthing the leader of the pack. Tableau, for a variety of reasons, is a strong leader in Business Intelligence software. The software of the stone throwing competitor for a variety of less interesting reasons most certainly is not. Below you see G2Crowd’s quadrant for business intelligence apps— the TripAdvisor for business apps. This is vendor-neutral crowd sourced data. 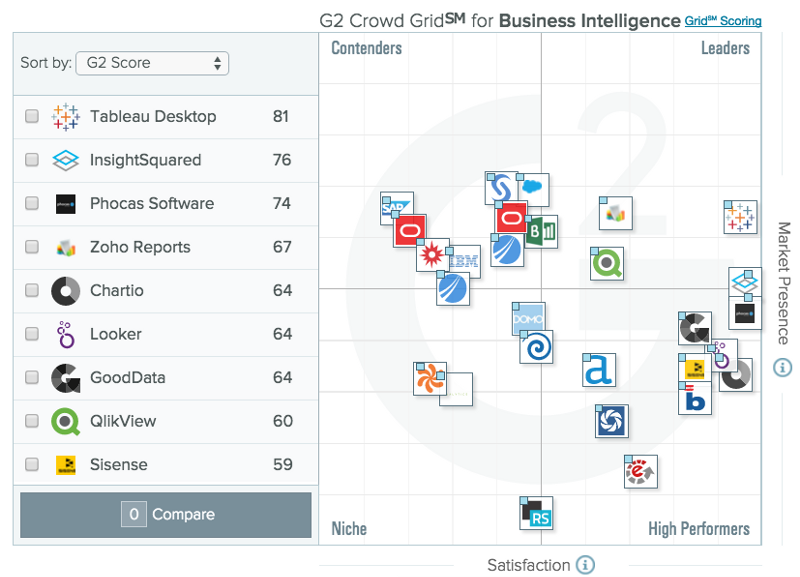 Tableau sits in the number 1 position according to G2Score. However, in fairness, Insight Squared and Phocas Software both have higher customer satisfaction scores and have a legitimate claim to the top spot. G2Crowd interprets Tableau as being above them primarily because of it’s superior market presence. All 3 apps have about 80 ratings each so volume of ratings has no bearing. The stone throwing competitor’s app sits last on that grid for customer satisfaction.

“Without data, you’re just another person with an opinion.”
William Edwards Deming

If you live in a glass mansion, be careful about who you invite inside. Some may point out that Tableau recorded a $41M loss in Q4 of last year. However, as Tunguz demonstrates for SaaS companies, there is no significant relationship between the level of recent stock price collapse and profitability. Let’s look at Tableau. They grew revenues about 60% last year and about 80% in each 2014 and 80% in 2013. That would lead one to suspect that they can easily slow down a little — which would greatly reduce their cost of customer acquisition (CAC). They could make a significant reduction in marketing and sales spend and record only a slight slowing of the trajectory they are already on. The reason for that is that they will only lose the really hard to acquire customers if they adjust spend downwards by 10 or 20%. I suspect they will not do that and will continue their highly efficient land-grab. That’s because for Tableau, and most of the SaaS companies hit hardest, there is no crisis. They will continue their land-grab at a rapid pace.

Data is a bell that is ringing the death knell of aggressive old school vendors and legacy software companies that refuse to take their head out of the sand. Non born-in-the-cloud software behemoths can talk about cloud til the cows come home. However, it’s only the ones that wed cloud-related brand equity with cloud-related reality that will survive, and perhaps even thrive. The sharp suits, knowing grins and large war chests will not free them from a requirement to innovate in harmony with our needs. I say “our” because we’re all consumers of software.

While role-based decision maker taxonomies in B2B still exist, ‘the buyer’ is now pretty much all of us. Including the vendors.

The data bell is growing and becoming ever more resonant. As is our ability to rapidly decipher it’s patterns. It’s increasingly thunderous toll will herald the extinction of stone age giants who inaccurately (sometimes desperately) describe their software stacks as enterprise class. If it’s not rapidly scalable and cannot easily be upgraded, it is certainly not enterprise class in 2016. They threw stones at the cloud for years to no avail. The smarter ones realised at an earlier stage that they had to start the cannibalisation of their expensive shelf-ware or die. A few transition well. The rest pay a fatal form of lip service. It seems probable to me that a monumental and widespread crashing sound of broken glass will happen sooner than many realise. There will be a real real crisis alright, but hyper-growth SaaS companies will not be in the cross-hairs.

The gloating image I saw of Tableau’s fall on LinkedIn showing market misfortune left a bad taste in the mouth. And some of the comments telling us what the graph “demonstrated” were laughable. Logic needs to be taught in school.

“It is a capital mistake to theorise before one has data. Insensibly one begins to twist facts to suit theories, instead of theories to suit facts.”
Arthur Conan Doyle

Such a post is damaging to one’s personal brand equity — and by extension the company one represents. The mean streets of social media are not so lightly ruled and people’s minds are not so easily twisted in this medium. Some colleagues of the attention seeker who kicks the dominant player when it’s down may pat him on the back, but colleagues are not buying his software. By all means be competitive, but align that with logic and accurate information. Call the buyer a fool at your peril.

We see this behaviour all the time. When the leader of any pack’s platform goes down for a couple of hours, the lower performing competition come out of the woodwork. When a major customer is lost (or there’s a false rumour of loss), a mob straight out of Shakespeare’s Julius Caesar appears ready to tear the superior software to shreds. All the unwitting mob does is shine a spotlight on the number one player in whatever domain the accusation addresses.

The day when vendors were generally perceived as trusted brokers of expertise are long gone. Business apps frequently have 2 or 3 full upgrades a year these days. Salesforce.com, for example, is about to have an impressive 50th release (all major upgrades). And the numbers of apps in virtually all functional categories is exploding. Software can process data far more efficiently than humans and can be unbiased.

Subject matter experts in the future will be built with ones and zeros to curate, analyse and interpret crowd sourced data.

As software eats the world, data will usurp humans as la Bocca della Verità (mouth of truth). And the sound of crashing glass will only be a fading memory.