Dreaming in Concrete and Einstein’s Lunch 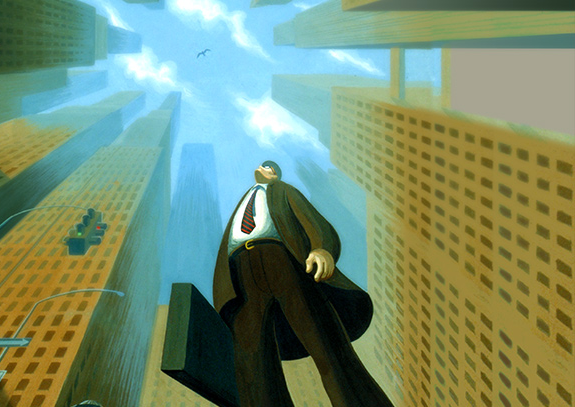 illustration by Eric Drooker for the New Yorker

Passing by Yerba Buena in downtown San Francisco on my way to Dreamforce yesterday morning I noticed a plaque with a poem titled “Dare we Dream in Concrete?” I stopped and looked around to reflect upon the enormous entity this little startup I joined in March 2003 had become. The remaining follicles of my shaved head pushed upwards as a wave of adrenaline, memories and Salesforce aficionados whooshed by from all directions. An army of people raced to the various buildings Salesforce has commandeered for its incredible ecosystem. I imagined another figure walking by. A giant. His borrowed name is Einstein. He’s hungry for datasets to query the nature of things, question his theories and feed his hunger for deep learning. He has his eye on a mountainous bluebird for lunch. But the bird is a just a little too big for his belly at this moment in time. He wisely decides to pass by and save his appetite for later.

Salesforce would do amazing things with Twitter. It would do more with that technology than any other major player in the world of software. However financial realities trump ‘extreme nice to haves’. A more likely suitor will be Google. And that would still be a pretty good result for Salesforce. Google would allow Salesforce to continue to drink from Twitter’s firehose for a reasonable cost. Microsoft would eventually not allow that in the highly unlikely scenario that they acquire. Anyway the world would be a much poorer place if the same non-born-in-the-cloud company owned both LinkedIn and Twitter.

Does it really have a value in the same ballpark as LinkedIn? Left to its own devices it certainly doesn’t. However Twitter in the right hands does also hold huge value. 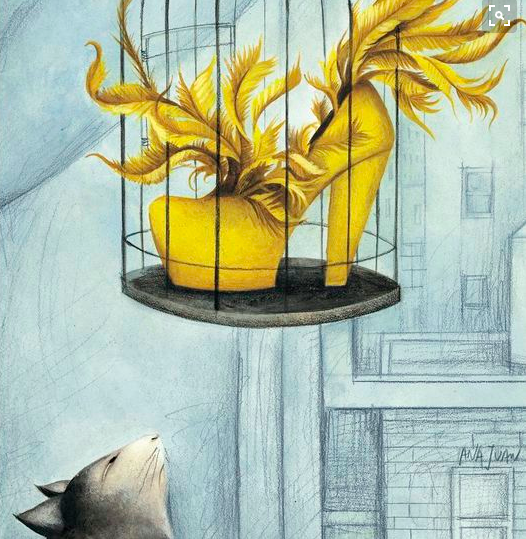 Illustration by Ana Juan for the New Yorker

“Intelligence without ambition is a bird without wings.”
– Salvador Dali.

R “Ray” Wang describes Twitter’s immense attraction as essentially a function of its relationship graph where consumer graphs and enterprise graphs meet. “The graph is activated by artificial intelligence and this is why there is mass interest. Twitter, like LinkedIn, provides a very large and active graph.” Salesforce is the undisputed king of CRM and now a massive innovator in predictive analytics and deep learning. It would be a beautiful marriage, but financial prudence will forbid it.

Twitter was on the run before it initiated these negotiations. It’s growth is stagnating and its revenues are unimpressive relative to its footprint. So Twitter decided to offer itself up for negotiation. Large bidders responded with enthusiasm. Understandable. Twitter is an extremely valuable asset. However its also a very difficult asset to value. Therein lies the rub. Twitter’s ultimate value is also heavily influenced by the capabilities of the acquiring company.

Its obvious that if it were viable, Salesforce would acquire Twitter. However the board of twitter are looking for upwards of $30B. They’ll probably get something closer to LinkedIn’s price of $26.6B (56% of Salesforce’s market cap at time of writing). The timing is not right unfortunately. And market sentiment has made it almost impossible.

As for Chief Digital Evangelist Afshar’s tweet? That confirmed the engagement with Salesforce was in train — which we now know Twitter initiated. What else is he going to tweet? Afshar is second only to Benioff in Twitter terms within the Salesforce fold — and he (and his team) tweet a lot more frequently. He was very late to the party on Twitter but has tweeted an average of 4,250 times a month since then. He’d be in heaven if Salesforce bought Twitter. For a start his role would be greatly enhanced.

Combining Salesforce’s unparalleled customer relationship management (CRM) capabilities and accelerating capabilities in deep learning and predictive analytics with Twitter’s enormous relationship graph and constant rich stream of real-time user data would be compelling. Google would come in a very good second in terms of deriving value (for completely different reasons). Why second place? After all Google is an even bigger player in AI than Salesforce. The reason is simple. Google doesn’t really know its customers very well. In some ways its a typical born in the cloud company that grew rapidly with a viral app. Google’s scale is entirely atypical of course. And let’s remember that Salesforce is not distracted by the complexities of heavy-duty fundamental research into AI. Google rivals IBM in that respect. Salesforce is ever the pragmatist. And its focus on profit-generating insights with Einstein will reap a very generous harvest.

Salesforce has very deep relationships with its customers. The sort of relationships the legacy non-born-in-the-cloud giants have. Only deeper, wider and far more positive. It can really take advantage of that vast and ever evolving Twitter relationship graph. In time Salesforce would transform Twitter from a chirpy bluebird into a soaring eagle. However it would be under severe pressure to deliver value almost immediately. It takes time to ingest an entity that size and the sort of value Salesforce would extract from Twitter would take time to develop. It would be the biggest risk in the history of the company. Simply not worth it. The difference is that the risk for Google is much lower and it can get to the point where it is extracting value from Twitter more rapidly. 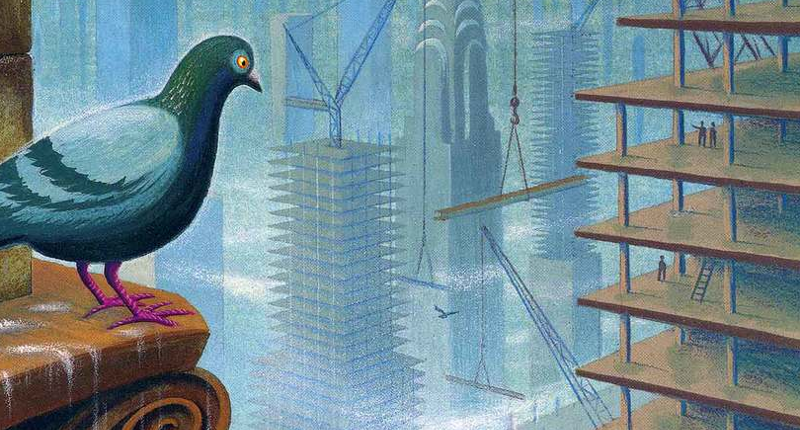 Illustration by Eric Drooker for the New Yorker

No. Just hugely unlikely. The engagement was real. It stretches Salesforce to the absolute limit, but Benioff said he was prepared to go beyond $26.6M for LinkedIn. Some people hold that Marc Benioff wants an attention-seeking acquisition. This is a ridiculous assertion. Benioff is deeply sophisticated in his thinking and he’s generally very level headed. When it comes to big decisions he wisely collaborates with a trusted cadre of smart friends and generals. This is a massive decision. Far sighted ambition, carefully calculated risk-taking and strategic focus have guided him up to now. There’s no indication that this has changed. The level at which he is prepared to go for Twitter will have been already carefully assessed and calculated. Eventually I’ll get one of my predictions wrong of course.

“I confess that in 1901 I said to my brother Orville that man would not fly for fifty years. Two years later we ourselves made flights. This demonstration of my impotence as a prophet gave me such a shock that ever since I have distrusted myself and avoided all predictions.”
– Wilbur Wright

It is also useful to remember that Salesforce has a history of taking on well calculated and sizable risk. Salesforce became the global force it is today by having the stomach for immense pivots. CRM in the format of Software as a Service going up against a once mighty Siebel was a risk Marc Benioff did not need to take personally. He was already comfortable for life. Chatter and its impact on UX and (collaboration in context) was a risk Salesforce did not need to take when they were already accelerating at a dizzy pace. Many people (including a few people in Salesforce at the time) failed to understand how incredibly innovative it was to deliver collaboration in context. Facebook and Twitter provided the UX, but Salesforce had the brilliance to make the conversations productive. PaaS and an App Marketplace were risks that paid off handsomely. Salesforce has a knack of making the right calls when the stakes are high. Its very few failures were mere chicken feed by comparison.

The size of the prize in AI

The prize is enormous. International Data Corp predicts the global market for cognitive platforms and apps (pretty much all of the commercial market encompassing AI) will grow from $1.6B in 2015 to $16.6B in 2019. That’s a compound annual growth rate of 65.2%. Therein lies the reason why Salesforce invested $700M in the last couple of years in acquiring AI companies and 175 data scientists. I repeat. Salesforce’s combined ambition, AI focus, superb customer service and marketing technologies, and rich ecosystem of apps and vendors would reach even greater heights if they were fed by Twitter’s amazingly rich data and ‘relationship graph’.

Salesforce’s Einstein is incredibly exciting but it’s only just arrived. It’s the right strategy. Salesforce is building a battalion of superb data scientists (175 to date). Users of Service Cloud, Marketing Cloud and Community Cloud would have an eye on the amazing possibilities Twitter would offer. That ambitious Salesforce eye firmly fixed on data science will always crave data. But Salesforce is smart enough not to let it’s eye grow too big for its belly.

For Salesforce the prospects remain incredibly bright without compound. If only I had a dollar for every Wizard of Oz that disagreed with me over the years on Salesforce’s prospects.

What exactly could Google could do with Twitter? Quite a lot. Google could immediately leverage the platform for advertising revenue and access the data to improve it’s search algorithm. It could build their much coveted social network (after missing the Facebook boat with the excellent but far less successful Google+). Twitter would dovetail beautifully with YouTube and compete strongly with Facebook’s video discovery. Its micro-blogging attribute could make YouTube channels and its YouTube Community tab a lot stickier. Fabric’s dev tools for mobile app developers is also a diamond for Google. It would add a lot of value to Android as it would open up a lot of possibilities for app development on their Android OS. Twitter’s Fabric helps developers in a wide range of areas from analytics to monetisation. And it would give them a foothold in apps on their fierce competitor Apple’s iphones. These are some of the reasons Google will drive the price and the decision out of Salesforces hands.

Google signposted their intentions recently by initiating talks with Lazard to assist in evaluating their bid strategy. Less than 48 hours ago Salesforce paid $340M in cash as part of a $700M package for Krux. Google and Salesforce will be friends and partners for a long time yet.

Given the commercial realities, a Google acquisition of Twitter would be the best of all outcomes for all 3 parties. 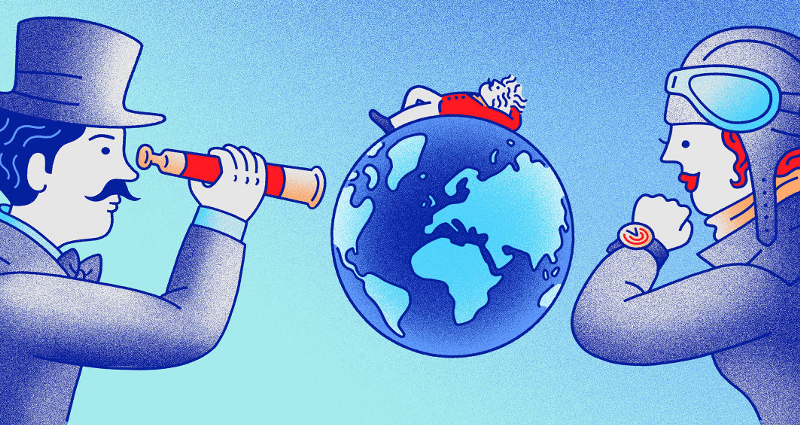 illustration by Tomi Um for the NewYorker

The force is still with Salesforce. It can now focus this week’s energies on an army of people daring to dream in San Francisco’s concrete, steel and glass. And the eyes of the world will be focused on Benioff and Einstein’s brave evolving world at 1pm today.

“Time is a train
Makes the future the past
Leaves you standing in the station
Your face pressed up against the glass”
– U2
“The desire to fly is an idea handed down to us by our ancestors who… looked enviously on the birds soaring freely through space… on the infinite highway of the air.”
– Wilbur Wright